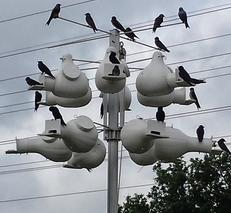 Dr. Paul C. December 2018 South Carolina  Hi there. I just wanted to tell you that I received my new rack and gourds very soon after I ordered and could not be happier. I have had housing for my martins at our lake house in Eutawville, SC on Lake Marion for 20 years. In the last 2 years we have been under attack by red shouldered hawks as well as a barrage of starlings. This year, after doing some research and coming across your Gemini System and Troyer Gourds, I ordered this for my colony. I could tell from the design of the rack and gourds that a lot of thought and consideration was put into their development. Thanks again for such a great design, instructions, and very high quality fabrication.

Robert R. April 2017 Kentucky  Hello, just want to say I think you guys are great.  In my opinion, you are the go to place and are actually the Purple Martins best friends.  I was thrilled with your prices.

Layton H.  January 2017 Texas  I run a huge ranching operation in North Texas. We have had several large wooden housing systems in place for many years, but only sparrows wanted to use them (plus they are really hard to clean out).  In January of 2015, I had (7) Super System 24's installed at various locations on the ranch and around my house in town.  We saw many purple martins flying around the systems the first year, but none built nest or raised any young the first year.  To our surprise, however, the 2016 season amazed us with about half of all the compartments on the systems being used by the martins to raise young in.  So, we have now dumped the old nest out, pre-nested all the compartments with pine straw and are eagerly awaiting the return of our new colony of purple martins.  These Troyer gourd systems are by far the best purple martins housing systems you can buy to get the birds to nest on your property.

June 2018 Update  To our amazement, every compartment on all of the housing systems are filled with purple martins.  When the birds started coming in this year, there was so much excitement in the air with all the competition that was going on for the nesting compartments.  There were many more adult birds than available gourds.  My wife in the beginning thought I was crazy to spend our money on these gourd systems since the original wooden houses didn't work, but now she can hardly wait for the purple martins to return to our home every year.

Tammy B.  August 2014 Texas  I am in my late 60's and am confined to a wheel chair.  In 2009 Purple Martin Propagators came out and installed a Super System-24 in my backyard.  I had been using Nature House metal martin houses for decades, but needed someone to come out every year to clean them out for me.  In 2007, I only had 3 pairs returning to raise young.  This is when I learned that the metal houses had actually been killing off my colony in our HOT Texas summers.  After saving my pennies, I splurged for the SS-24 because the wench system made it really easy to raise and lower (something I could actually do myself).  Within 2 years, all the gourds were being used.  I love watching the adults feed the babies and keeping track of how many fledge out each year.  This year I had 132 babies fledge from the gourds.  Also, the Troyer Vertical Gourds are really easy to clean at seasons end (just dump the solid material :: no washing needed :: and pre-nest with pine straw).  My kids thought I was crazy to spend this kind of money on a bird house, but now when they come to visit we all sit outside watching martins.

April 2016 Update  Last year I had way too many purple martins fighting over the 24 gourds, so my kids helped me purchase another SS-24 and we had it installed next to our patio.  By the end of March, all 48 gourds were filled with nesting pairs of purple martins.  Highly recommended.

Bill J.  June 2013 Oklahoma  Purchased the Super Deluxe-12 and installed it January of 2010.  First year we didn't even see a purple martin on our housing system.  March 18, 2011, the martins started landing on our gourd system and by mid May we had eight pairs using the houses.  Ended up with 38 babies fledging out.  March 9, 2012, martins came in and by the end of the month all twelve gourds had birds in them building nest.  Ended the year with 69 fledglings.  This year we had more martins flying around than compartments to house them, so we went ahead and bought the Super System-24 and installed it about 50 feet behind the other pole.  We now have 21 of the 24 compartments filled with babies as well as all 12 gourds on the smaller system filled with babies.  Absolutely love these Troyer Gourds.  The martins are raising more young in them and keeping the sparrows out is really easy.  Highly recommend anyone looking to buy a purple martin housing system to just go ahead and spend the money for these (worth every penny).

Update May 2017  Had Purple Martin Propagators come out in January and install the newer Gemini-24 System up close to our swimming pool area.  The birds have now filled up all three of our housing systems.  Great to watch these birds while entertaining guest around a bug-free pool.